December 16, 2021 is a historic day for Star Atlas, a the moment of grand expansion into a higher dimension with the creation of its key foundational layer, gameplay, allowing players to fully control and utilize their metaverse assets.

The new feature, accessible under the Faction Fleet tab on Play.StarAtlas.com, creates direct interoperability between the Solana blockchain and the players, allowing for the creation of complex gameplay mechanics, a sophisticated economic system as well as 2D and 3D interactivity — all completely on-chain.

This pillar of the decentralized metaverse is itself a major evolutionary advancement of the core of Star Atlas, its Project Serum-powered Galactic Marketplace, released in Q3 of 2021, and is on track to be continuously expanding with new gameplay modules set out in the public Star Atlas Roadmap.

It provides those involved in the Star Atlas ecosystem to get a taste of their how time and effort spent in-game translate to real world earnings through ATLAS-based rewards and usher in an entirely new, self-sovereign economic paradigm.

The first gameplay functionality is called Ship Commissions on Remote Expeditions or SCORE for short, fully accessible via a web browser.

Shipped to the worldwide Star Atlas community during the Shipmas season, between two waves of new spaceship NFT drops and in spirit of charitable giving, SCORE gives players the ability to enlist their own Star Atlas spaceship NFTs from the Galactic Marketplace into the fleet of their own faction: MUD, the ONI Consortium or the Ustur Sector.

By picking a side, joining the cause and volunteering the ships, players are helping their faction secure and expand control over their respective Council of Peace (COP) security zones in deep space, choosing a path of exploration.

As space is an unforgiving environment and heated situations during ship missions are unavoidable, players need to keep their ships maintained. As fleet managers, they learn how to supply them with fuel, food, ammo and maintain them via repairs in order to keep them running. As a reward for their work, they receive faction payments in the form of ATLAS, the in-game currency.

> As a gesture in the spirit of giving during Star Atlas Shipmas, all owners of spaceships who had their ships in their Solana wallets like Phantom on Wednesday, have received a free supply package of fuel, food and ammo for each of their ships. The airdrop can be claimed in the Inventory.

The SCORE feature will be receiving regular updates over time, expanding its functionality via future modules. The focus on fleet management gameplay also serves as an onboarding process for players looking forward to play future modules including the Unreal Engine 5 version. It introduces the tasks and resource management strategies a space explorer must master to be able to fully benefit from the opportunities during the golden age of space exploration.

As SCORE is full-fledged blueprint for what is to come, the food, fuel, ammunition and repair toolkits are themselves NFTs whose supply can be depleted and replenished by purchasing them on the Galactic Marketplace.

As all spaceships are different from one another in their attributes, both strengths and weaknesses, and as the situation in deep space continues to evolve, players will have plenty of ways to strategize how to best run their fleet for the time to come.

What are you waiting for?

Join the fleet now under the Faction Fleet tab on Play.StarAtlas.com!

The Club Guild Calculator for SCORE ROI and Stats for Ship Staking. 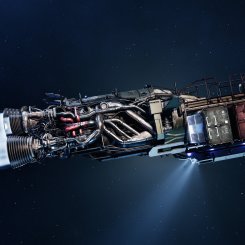