On Tuesday, December 14, 2021, starting at 9 AM PST and continuing with a new drop on the hour, five new spectacular Star Atlas ships will become available on the Galactic Marketplace as part of a WAVE 5 of the Galactic Asset Offering. From December 20 and 23, WAVE 6 will bring four more ships to Play.StarAtlas.com.

The spaceships on offer are one of the key assets in the Star Atlas vision of decentralized, fully self-sovereign gaming model with player-owned ownership of assets, powered by blockchain technology and non-centralized NFT marketplaces, a stark contrast from many game developers who opt to monopolize asset ownership and distribution through imposing arbitrary restrictions on free movement of assets and accounts.

As with the previous ship drops, all ships payments are possible with the Star Atlas in-game currency, ATLAS. The availability of each new ship’s supply is in a 50-50 ratio of ATLAS and UDSC, half of the total quantity being set for purchase exclusively with ATLAS and the other half with USDC. After the drop, the ships will continue to trade in both markets simultaneously.

These spaceships are also include pre-Showroom photo galleries and in-game specs, including Crew roles, Component slots, and Module slots, which are viewable on individual asset pages on Galactic Marketplace.

The first drop is Pearce C11, a legendary first-class fighting vessel, with an end-to-end length of nearly 800 meters (2600 feet) that can pack a fleet of its own — a true game-changer in any peace enforcement battle.

The Pearce C11 is the most significant fleet carrier vessel to come from the MUD Territory. The C11’s hull is riddled with hangar bays and studded with turret weapon arrays providing a platform to house and protect an entire fleet of ships all the way up to capital sized docking mechanics. Attempting to approach this ship with hostility is a well documented fatal error and that fact is common knowledge for any Jorvik roving band of pirates. Often doubling as organization headquarters, the C11 provides every imaginable onboard accommodations to equip and sustain an entire fleet of ships and a broad roster of crew members.

The second drop is Rainbow Chi, an epic wonder of cosmic engineering that has its design speak for itself. With an end-to-end length of 35 meters (115 feet), landing it in your backyard won’t go unnoticed by anyone in the neighborhood.

The enigmatic Rainbow Chi is a slippery fighter ship with integrated photoli derived shape-shifting technology. This revolutionary tech allows for the repurposing of charged mass into an array of functional optimizations. Hierarchical morphing hull systems create a platform that can fully power weapon groupings or instantly shift charges to amplify distributed hullshock dispersal. This flexible vehicle architecture boasts near perfect, constant equilibrium while fiercely turning the tides in any spaceborne threat.

The third drop is Ogrika Jod Asteris, a luxurious legendary ship for experiencing the best of what the cosmos has to offer. With an end-to-end length of nearly 510 meters (1700 feet), it has plenty of room for the grandest of ideas.

The Ogrika Jod Asteris is a capital class transport vessel representing the ultimate in punaab ultra-luxury accommodations. With an onboard capital sized theater for live events, multiple cafes, lounge areas and a generous sized observatory deck, this cruise ship is the finest way to tour the stars. Experience astronomical opulence only attainable through the inimitable signature of the viciously wealthy punaab ship manufacturers.

The fourth ship to drop is Calico Evac, a must-have for when your active engagement in deep space doesn’t go according to plan.

The Calico Evac is a nimble but robust rescue and recovery vessel. These vessels could be found in any well-equipped active combat scenes. With the ability to launch and retrieve multiple rescue drones, the Evac quite literally is the difference between life and death. Higher tiered medical bay facilities and personnel have the ability to revive stunned and critical casualties or to pull cryostatic escape pod crew out from indefinite slumber. The custom hull-piercing cockpit screen makes visibility a vital component in the success of dangerously tight rescue missions. The Evac is a testament to the brilliant designs and industrial mechanical genius behind the teams at Calico.

The fifth and final drop in WAVE 5 is Tufa Feist, an exotic ship of metagenic origin.

The metagenic stone beings comprise the Tufa faction and when one of them take the shape of this small fighter ship they identify as a Feist. No longer can one feel safe casually navigating an asteroid field because lurking in plain sight is a potential ambush vehicle collecting its raw power for a brutal sneak attack. Living, sentient rock formations combine discarded mining tech into a powerful, blitz-styled combat platform with local stone material shifting camouflage abilities. Despite the exotic blend of industrial technologies with breathing non-organics, the Tufa Feist is a surprisingly comfortable vessel to take on many challenges in an variety of deep space adventures.

The next ship, dropping as the first one in WAVE 6, is Fimbul BYOS Earp, your best bet for sparring in space.

True to Fimbul BYOS form, the Earp sheds all grace and dignity for raw, specialized power and functionality. This combat ready ship is tuned to manage oversized cannons and engines to allow for a beefy damage rate in a uniquely quick flight style. Dogfighting against one of these puppies is not recommended if your goal is to keep your head intact with your neck. Onboard accommodations are sure to conjure fond memories of time spent in solitary confinement. Pilots of the Earp know space can be dark, cold and unforgiving and only those with the hide of a jupran ox can endure her chronic punishment.

Pearce’s fixed-wing X6 provides a surprising amount of comfortable living space aboard a compact and highly agile fighter patrol ship. A supremely capable combat vessel with an extended atmoglass canopy provides a conspicuous piloting advantage as well as a way to soak in the beauty of the cosmos. Packed with best-in-class weaponry, generous onboard storage and a default brig configuration makes this combat and capture vessel a no-brainer for the security minded starfarer.

The second ship dropping in WAVE 6 is Fimbul ECOS Bombarella, a terrifying yet harmonious bomber.

The Fimbul ECOS Bombarella is a massive, capital-sized bombardment system housed in a holistic and empathetic space vessel. With an emphasis on unusually thick hull plating, oversized bomb bays, highly comfortable and meditative living facilities, the Bombarella commits swift justice to the violators of the natural worlds while providing one of the most satisfying ways to experience life on the open vacuum of black space. Peace and love through dismantlement and rebirth.

The fourth and final ship dropping in WAVE 6 is Fimbul ECOS Treearow. At a length of 800 meters (2600 ft), its silhouette in the sky is an omen of a scorched earth and unspeakable terror.

The Fimbul ECOS Treearrow takes a slice out of pre-MUDian earth era biomes and creates a portable living vessel welcoming to all of humankind. All peoples who feel stranded and abandoned by the traumatizing break humanity experienced when they loosened themselves from Mother Earth’s nurturing embrace can find a grounding home aboard the ECOS Treearrow. Equipped for terrifying planetary destruction, discovering this ship in your atmosphere is rarely ever a good omen. Unless, of course, it is above Earth Prime, the new home of the ECOS ideologues who terraformed a distant planet to match humanity’s one true biome and where you can find these ships being built with delicate care. 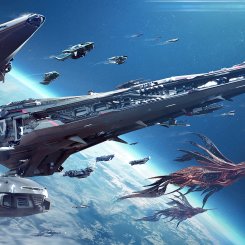