GAME ON: Pledge Your Ships for Factional Fleet Service in Star Atlas

At the height of Shipmas, a spacecraft with inexplicable shapeshifting capabilities has been discovered. You’re hunting it.

The spacefarers who stop at Bar Aria are normally after rest and recreation, but the room’s mood changes quickly whenever a high bounty is broadcast through the beam. Crews from the same ship huddle together. Captains who are part of the same fleet strategize. Fingers clench a little tighter around drink glasses. Whispers are traded to assess whether a mission was worth the risk.

This bounty was something new — a search and capture of… an unidentified ship that could transform in-flight. The bounty description indicated the craft didn’t merely shift modules to reconfigure its hull. Rather, it shifted form and structure like fluid. Nobody in the room had ever encountered tech and engineering like that before.

Threat level? Unknown. But the ATLAS on offer carried enough zeroes to suggest heavy firepower was a prerequisite. The craft has been flying near MUD supply ships. Even though there hasn’t been direct conflict, faction leaders worry that this may be an advanced fighter developed by a hostile organization.

While other captains are still weighing whether the bounty’s reward was worth it, you are boarding the Stronghold, a Pearce C11 fleet carrier and the pride of the MUD faction. In the docking bay, you climb into your Pearce X5, the Maktoob, a pirate-hunting fighter in which you and your co-pilot have racked up a couple dozen kills.

The SCORE — Ship Commission on Remote Expedition — is a lifeline. Your ship is well stocked with supplies — hydrogen fuel cells to sustain a burn of up to three sols, food for two bodies, basic ballistic ammunition, and hull repair kits to patch up after armed engagements and scratches from space debris. But you’re short on ATLAS for ship upgrades.

Just before you were ready to lift off and rendezvous with the Torch of Ulysses, a VZUS opod exploration and data validation vessel that is part of your fleet and was already in the quadrant where the shapeshifting craft was last seen, you receive a distress signal from a Fimbul ECOS Greenader, a low orbit bomber with equal parts firepower and eco-consciousness.

… stranded… out of fuel… we need assistance… coordinates are…

Every explosive released by the ships of the Earth Conscious Ontological Society, or ECOS, contains terraforming compounds. Some argue that’s the whole point, to turn mining outposts into forests. Only true radicals chose to helm these craft. You were about to switch off the open comms channel, but three words caught your ear.

“Reset our path,” you say to your co-pilot. “Misguided as ECOS may be, we can give them an H-cell, take the reward, and then proceed to the Torch.” Halfway through your journey to rescue the stranded eco-terrorists, an Ogrika Jod Asteris, once an intergalactic tourist cruiser now hijacked and repurposed as a deadly battleship crewed by ONI freelancers, locks on to your carrier. They demand your food stores in exchange for keeping their fingers off the fire controls.

It’s ironic, you think, to be starving in one of the most luxurious ships ever made.

A ship like that needs 15, 16 crew members to function fully, or half that as a skeleton crew. The food you have onboard would hardly sustain them for a day, but they were surely starving, desperate — dangerous.

You veer into an asteroid field, its rocks long strip-mined, in a bid to lose the ONI on your tail. The Asteris gives chase. The Maktoob shifts its configuration: defense mode for maximal hull plating coverage to protect the craft as it rams through clusters of human-sized rocks, then speed mode with all thrusters at full punch, and attack mode when you have to blast larger asteroids apart.

You’re on the lookout for Tufa ships, particularly Tufa Feists that may be camouflaged in the field, disguised as rocks, but the only way out is forward. The Maktoob changes shape as it navigates the field, each movement choreographed by you and your co-pilot. The Asteris keeps up but slams into an asteroid roughly the size of your craft. It punches a hole in the ship’s hull and, well, you didn’t stop to watch what happened next.

You survive the encounter, but your ammo is completely spent. If you’re to refuel the Greenader and hunt down the mysterious shapeshifter, you’ll need to resupply.

You put the call out, and the pilot of a Pearce X4 answers. He sounds like he couldn’t be a day older than 15. That hardly mattered now. His bike could haul cases of ammo your way. A space station was a quarter hour’s zip away.

“We’ll cut you into our deal. Bring us some ammo, and we’ll pay for it in ATLAS once we hand over some fuel to a stranded Greenader. You’ll have to keep up with us. This is meant to be a fast run.”

As a precaution, you issue instructions to the Torch of Ulysses to converge with you and the X4 at the Greenader. Together, the four ships form an unlikely fleet — one that piques the interest of a curious observer. You see a craft emerge within line of sight, its silver body shifting, gliding, reshaping like mercury gliding onto itself. It’s impossible to say with certainty where the bow and stern are. Two sides are wedges, the ship appeared as a single smooth surface, its design pure grace.

“Photoli. It has to be,” your co-pilot says.

You found it. The Shipmas bounty is yours. Before you can hail it, the silver ship warps away. You spin up your drive and prepare for pursuit…

This is Star Atlas. A friend today could be a foe tomorrow. Factional warfare, guild skirmishes, economic leverage, and espionage are all part of the game. The year is 2620. Prepare for deep space exploration, combat, diplomacy, and conquest by visiting staratlas.com and join the Faction Fleet with your ships at Play.StarAtlas.com/fleet.

*The blockchain metaverse built on Solana unveils further details on factions and gameplay mechanics, including a key framework for the intergalactic economy* 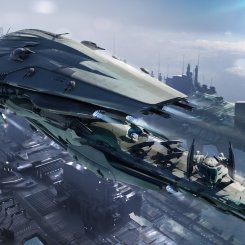