Star Atlas is thrilled to announce that Yield Guild Games has committed to purchasing $1 million worth of Star Atlas NFT gaming assets as part of a long-term partnership between the two projects. A space-based, science fiction MMORPG with immersive, photo-realistic graphics, Star Atlas is being hailed as the blockchain-based title most likely to first grip a mainstream audience. Assets that have already been acquired by Yield Guild from the previous drop include several spaceships such as Calico Guardian, Compakt Hero, Opal Jetjet and Pearce X4 among others. With their unique designs, different specs and rarities, guild members may use these ships to generate yield from in-game activities after launch. More in-game items will be purchased once other NFT drops are released in the coming months, including the upcoming one on Thursday, October 7, 2021.

Intrigued by the creative potential for earnings unleashed by the Star Atlas gameplay dynamics, Yield Guild formed a strategic partnership with Star Atlas in April of this year. The core values of the two projects are in close alignment with one another as both seek to create financial opportunities for gamers through economic expansion of the metaverse.

In addition to the existing teaser trailer, Star Atlas is also releasing a full game trailer on October 6, 2021 via a YouTube Premiere.

"Sarutobi Sasuke, Head of Partnerships at Yield Guild describes Star Atlas as 'one of the most exciting space MMORPGs in the blockchain gaming space,' revealing that the guild had recently committed to the purchase of an entire fleet of ships — among other in-game items — which will be acquired incrementally across different drops."

“We believe that Star Atlas has the potential to become a leader in the play-to-earn space as it aims to offer a huge range of ways that players can participate in the game, in a valuable and meaningful way,” said Sasuke. “We are really excited for our community to jump in and make a mark,” he added.

Players in Star Atlas initially choose a character role, for example, in Transport or Construction, or as a Miner or Data Scanner, and so on, which shapes the nature of their in-game activities, and owning items they use in the game as NFTs. This includes everything from ships to equipment to character skins, and even their metaverse accommodation. Several game assets are already on sale at the game’s marketplace, with asset prices ranging from $20 to over $1 million. Aided by their acquired assets, Yield Guild will be presented with several cooperative opportunities, ready to be capitalized upon through the coordinated efforts of guild members.

Star Atlas has placed a high level of consideration into every aspect of the game’s creation, as is evidenced in currently released footage and reflected in the White Paper and Economics and Governance Paper. Over the past two years, the game’s development team has expanded to include over 130 individuals, all currently working towards launch.

Star Atlas is striving to be the first blockchain game to deliver a AAA-grade cinematic-quality visual experience. The game’s real-time graphics are powered by Unreal Engine 5’s Nanite, which allows textural detail to be custom-designed down to the pixel. This will provide Star Atlas with an almost lifelike feel and introduce a level of gameplay fluidity not shared by other blockchain-based titles at present.

“Our partnership with Yield Guild Games is bearing fruit for countless metaverse players worldwide, providing access to flourishing gaming communities based in the Philippines and throughout the world, while giving an opportunity to millions of players to create their own prosperity through Star Atlas. With the groundbreaking economics and governance model that goes much beyond ownership of assets, the ability to truly reap the fruits of their time and effort spent in the game will open an unprecedented array of possibilities for Star Atlas players and the socioeconomic model of the future,” said Michael Wagner, co-founder and CEO of Star Atlas.

While the game itself is under development, new features are being rolled out on an ongoing basis, including a Faction Selection update in the week of October 5, 2021, and a mini-game later this year, giving players a glimpse into what the game will entail. The team persistently reminds the community of the focus on the long-term viability of the game, providing regular announcements on their website and updates on Twitter. Most recently, exchange giant FTX teamed up with Star Atlas to release FTX-themed spaceship skins, currently for sale on the exchange’s NFT marketplace, and with digital design house The Fabricant to release FIRMAM3NTAL: STAR✩MAKERS, a first-ever high fashion blockchain gaming garment collection.

Other interesting features and facets of Star Atlas include:

*In the most intense feature release week yet, the doors to the blockchain gaming metaverse will begin opening with a new faction selection release.* 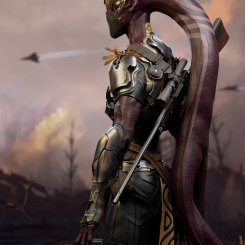