Between the vast spaceships, advanced weapon tech, and political power available in Star Atlas, perhaps the most coveted resource of all is often the most overlooked — land.

The days are just as long as the nights, but when I find what I’m after, it’ll be worth it. I see the ONI marauders battling with USTUR ships, while MUD captains hover on the perimeter, waiting for their chance to move in. But me? I don’t engage. There’s only one thing I want and compared to spare parts, a chest of ATLAS, or even the latest weaponry, it’s worth ten times as much. Is it lonely out here, drifting through space searching for distant planets? Sure. Will my name be spoken about for decades to come after I discover, explore, and conquer them? Possibly. In deep space, you can argue that true power is who has the biggest ship — and yet in the same breath, you can also say that it’s all about who owns the most land.

In any MMO world, land has always been an important resource. In the vast intergalactic Star Atlas metaverse, because of blockchain integration, land is much more than something to be farmed or a place to build your barracks. For explorers, land is what allows you to get ready for space. For landowners and producers, land is what will help you build your empire.

Each planet is divided into land parcels, and each parcel is represented as an on-chain NFT, which records the specifics of each parcel (size, borders, location, current ownership, and much more).

All buildings are built on something, whether it’s a space station or a stable upper crust of a planet/ asteroid. Owning land itself opens the player up to the possibilities of mining and farming, for example, and to defend the territory. There are many technical aspects about land, but here are some of the main highlights: - Land is owned and it can also be lost; - Star Atlas utilizes innovative Land Value Tax (LVT) to prevent “flipping” as well as to incentivize users to make use of their land parcels; - Players can sell land, buy land, collect taxes, or use it as collateral for loans; - Land parcels can be acquired in primary markets through an auction, or in secondary markets, where landowners can sell their land parcels in exchange for ATLAS.

How to Set Up an Extractor and a Mine

Owning land is just the beginning. You’ll see the real benefits when you build on it. One of the best uses of land in Star Atlas is to build an extractor to mine for raw materials. Just like anywhere on Earth, there is an initial cost, continued maintenance costs, as well as power requirements filled by power-producing buildings. The upside, however, is that an extractor will also earn yield in the form of raw materials as well as additional fuel to transport cargo into space. Both taxes and fuel are paid for using ATLAS, the metaverse economy’s currency.

Raw materials in Star Atlas are represented as fungible assets that are produced by miners and consumed by production.

While building your production empire, expect there to be political struggles both within the entirety of Star Atlas as well as your regional DAO (Decentralized Autonomous Organization). To help deal with this, Star Atlas has introduced a mechanism whereby landowners can vote in their regional DAO to help better govern their region of the map. For example, landowners in a specific region might put forward a DAO proposal to adjust taxation on certain activities. Voting will be done by staking POLIS, the game’s governance token.

Regional (low-level) DAOs can vote to change, add, or abolish policies — military, homeland security, external relations — as well as adjust the budget to better suit the region’s needs. Owning land is a requirement to vote, and each regional DAO vote will affect your relations with other regions, either making things easier, such as importing cheaper supplies from builders, or more difficult, by voting to impose a high tax on imports. It’s all up to you.

Much More to Come

Space exploration is cool, but for many, owning land and shaping the future of the game is where the fun is. While other MMORPGs tend to think of land from a geographical or terrain perspective, Star Atlas treats land as an asset that, if used to its full advantage, is a very powerful one.

Star Atlas is creating a self-sovereign MMO with nearly infinite ways to play the game. Discover new worlds, battle for space dominance, or build an empire on land — the possibilities are endless. Space may be the final frontier, but land is where an explorer’s ambitions are seeded.

Get a better glimpse into land in the metaverse by watching the new Star Atlas Trailer, set to premiere on YouTube on Wednesday, October 6 2021, at 9 AM EDT (1 PM GMT). Set yourself a reminder here. 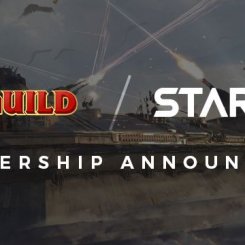