Introducing COPA — a Festival of Guilds

The first-ever Council of Peace Assembly brings together Star Atlas guilds from across the galaxy — and you are invited.

“I’ll take the Jorvik fist.” - Ustur expression implying that it’s better to be punched in the face by a pirate than stabbed in the back by a MUD or ONI.

The three main factions of Star Atlas — MUD, ONI, and USTUR — have avoided war for 100 years. But let’s be honest. No one would call it a tension-free peace.

But visit a starbase, listen to the chatter in the halls or between the airlocks, and you’ll hear whispers of concern, questions about resources, and the rising prices of basic necessities. Everything is fine now. But some wonder if this can last forever.

If we pull back and look at the galactic big picture, this concern is not without reason. The three safe zones are enormous, but they hold a limited number of star systems and planets. Extraction of key resources is already robust and getting more efficient thanks to new mining rigs and equipment. When combined with the ongoing rise in faction populations, it’s clear that, at some point in the future, available resources will not keep up with demand.

Something — or someone — will have to give.

Maybe that underlying tension is why there are more arguments heard around the hangar bays, and why bars and restaurants are seeing less inter-faction seating. Some have heard old-timers grumbling that life was better before the treaty, even when there was a constant threat of war.

Maybe those are the reasons.

Or maybe the friction comes from the myths about caches of valuable resources lying somewhere beyond the medium risk zone, and the rumors that some have already been found and kept secret so that the spoils don’t have to be shared. There’s even talk of guilds quietly ramping up spending on ship shields and weaponry. For now, this is all just talk. But when traditional enemies and great distances are involved, rumors have a way of turning into beliefs, and beliefs into actions.

But if guilds have the power to start a new age of warfare, they also may be the only political structure in the galaxy that has the power to keep a lasting peace.

The leaders of the COP seem to agree. In a recent emergency session, they announced the formation of a historic meeting: the first-ever Council of Peace Assembly, or COPA. A gathering of the guilds of Star Atlas meant to increase trust and collaboration between one another and the three factions.

The benefits for new and established guilds — and even solo players — are numerous:

Who: Anyone (even non-guild players)

Why: Help yourself. Help your guild. Be part of history.

A tale about building a new world… 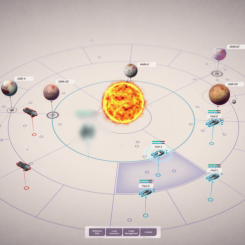