Train hard, arm yourself to the teeth and dominate a vast metaverse while earning ATLAS

This post has been updated with more information to answer questions from the community.

Star Atlas’s intergalactic journey begins with your choice to join one of three major factions — The MUD Territory governed by humankind, the ONI Region as a consortium of alien races, and the Ustur Sector controlled by sentient androids. Players are free to permanently choose a faction they will represent and fight for.

Getting ready to battle with your own ship

The life of a cosmic warrior in Star Atlas is very different from that of a landowner or a builder.

Imagine you represent the ONI Region and are engaged in a territorial conquest. Every battle needs a battleship and a crew to support its adventures. Aside from completing missions, players can use ATLAS, the in-game currency, to initially purchase a set of ships, crew, components through NPC merchants or peer-to-peer transactions. Every in-game component is an NFT — which means that you are free to sell them on supported marketplaces easily. You can monetize your ships in a myriad of ways, but few feel as satisfactory as the way of the warrior.

Combat Zones for all types of players

Star Atlas is designed to have multi-tier zones with varying degrees of risk. A new ONI pilot can get comfortable with the gameplay and explore the galaxy in the Faction Security Zone where you can learn the basic battle functions and how to aim your lasers. Once you feel ready for a fight, you can venture out to the Medium Security Zone where real combat begins. Be aware that any vessel used in the game is susceptible to damage just like in the real-world, and subject to the 4Rs (refueling, rearming, refeeding, repairing). Your ship could be blown into retrievable scrap, collectable parts, podded crew members, or compartments that could be lost forever — but fortunately only in the most dangerous of places.

In the Medium Risk Zone, if your ship or assets are damaged in combat, they will be reset (at a cost or for a fee) but not gone forever, acting as a middle ground between the exploration zone and losing your ship. The final distant zone of Star Atlas is an intense combat area designed for the most daring players where you can earn greater rewards, but if your ship gets blown up it is destroyed forever.

Arming your ship and crew for battle

As an ONI fighter, there is a variety of roles you can assume, such as mercenary, commander, or general. Similar to MMORPG games, for whatever class you picked, you have to strengthen your abilities. You can outfit your ship with the right components and crew for your role. All ships have a natural aptitude for different gameplay features and roles. As a fighter, you want to configure the ship in a way that amplifies its destructive power and strikes fear in the (many) hearts of enemies. Adding turrets and missile bays is a way to increase its firepower. You can also equip your ship with energy, ballistic, and disruption type weapons, which can give you an advantage by targeting different enemy ship components. In addition to the ship, your crew members can help you cinch a victory, if they’re well trained — and you can certainly advance their aptitudes. If your crew is trained together, and constantly shares touring duty, the crew can even receive buffs over time. Teamwork makes dream work — train wisely!

If you are thirsty for battle and glory, you can mark your stance as aggressive to signal you’re seeking a challenge. With the right combination of crew and ship equipment, you will be able to mow down enemy ships, land, and space in combat. Victory comes with rewards — you are free to take some spoils from the enemy ships you shoot down. The salvaged components and crew members you find are in the form of NFTs, which are freely tradeable and monetizable in the Star Atlas metaverse, which means both in and outside the game.

As a representative of ONI, it is your duty to dominate the MUD and Ustur factions by claiming more land and resources earned through heated battles. Each region in the game has a different amount of political influence controlled by holders of the POLIS token, the in-game governance token. POLIS holders have jurisdictional power over these regions and are eligible to exert oversight such as levying taxes, charging tolls, or creating laws over these regions. The ability to generate POLIS relies heavily on participation in the DAO (Decentralized Autonomous Organization), with greater rewards going to those actively engaged in voting. There will be additional metaverse mechanics, both internal and external, that will enable you to tap into the distribution of POLIS. Keep in mind that while you can earn ATLAS by being an ace starfighter, you can also take control of the metaverse by utilizing POLIS governance tokens.

Life as a fighter in Star Atlas

As an ONI fighter, you can train for battle and when you’re comfortable you can venture out to the vast metaverse. Arm your ship to the teeth and carefully pick your crew to seek glory as well as valuable resources stored as NFTs in each victorious battle. The ATLAS you earn in your journey can be spent to arm your ship or staked to be put to other uses.

Star Atlas gives players multiple ways to be a champion. How will you choose to conquer the metaverse?

*Whether it’s chic couture or heavy torpedoes, the builders in the Star Atlas metaverse design and produce items to match the needs of every individual across the galaxy.* 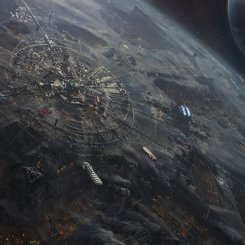