The vastness of Star Atlas offers grand scale discoveries and valuable riches for those who are willing to brave the unknown.

You’re a member of the MUD faction formed by bands of marauding humans who have taken to the stars. For you, the meaning of Star Atlas isn’t in accumulating a portfolio of land parcels on the surface of a planet, or flying in formation for bombing runs to destroy enemy squads. Instead, your motivation is unquenchable wanderlust. As an explorer, you want to be the first human to discover new places, new resources, new secrets across the known and unknown territories across deep space.

The galaxy is vast in Star Atlas, and very few make it far if they go it alone. Landowners, builders, fighters — every profession depends on all others, whether it’s to uphold tenuous peace or wage galactic-scale factional warfare.

Space exploration is one of the most complex and aspirational activities in Star Atlas. With factional struggle constantly remapping spheres of influence, explorers must utilize their radar-equipped ships to navigate deep space, and count on competitive technology to ensure efficient operations and your crew’s safety in unpredictable, hostile environments.

When things go right, you’ll be able to locate materials for miners to refine or for builders to craft new tech. This will give you new ways to shore up your ship and buff your traits — like damage reduction for your ship or boosted efficiency for extracting rare minerals. Or you can sell these perks for ATLAS, the in-game currency of Star Atlas.

Maintaining a healthy balance of ATLAS is key to your continued success and survival in Star Atlas. When you decided to take up the mantle of explorer, you either had to find someone to manufacture it from scratch (you didn’t possess the skills for doing it yourself) or you had to spend ATLAS to acquire a ship that fits the task. Plus, there are other costs to manage, like the 4Rs of ship maintenance, including repairs and fuel.

Explorers succeed not only by acquiring technological advances — all tracked as NFTs, making them tradable in the Galactic Marketplace — but also by forming a band of spacefarers, however unlikely the affiliations might be.

The Mechanics of Exploration

The logistics of exploring are expansive. Embarking on these missions means tapping other classes for their unique skills sets.

A squad of ONI Fighters you met at Bar Aria, an entertainment establishment run by an Ustur builder, are dependable when you need extra muscle as scouts or escorts in sectors where marauders may be waiting to ambush unsuspecting prey. And, fortunately, despite factional differences, the Ustur builder maintains friendly relations with you, and their Landowner vote gives you access to cheaper builder supplies to improve your ship.

As factional lines of control are redrawn and power dynamics shift, you spot an opening to survey a segment of dark space — a corner of the galaxy that hasn’t been mapped yet. You know there are unmined asteroid clusters there. Perhaps there are valuable resources that are yours for the taking?

You meet your Ustur builder and bar operator to purchase a few upgrades. She gives your ship a speed boost in case the going gets tough and you need to leg it. New scanners expand the range and spectrum of your mineral detection tech, giving you a better sense of what and where your prize might be. All of this is crafted from scratch or potentially purchased using ATLAS, and each component is tracked as an individual NFT.

The ONI fighters pledge their services, and the five of you set a course for the asteroid field. Three fighters fly ahead; one stays by your side as an escort. Marauders harass you along the way. Your fighters make short work of them, but a single enemy ship manages to limp away. You approach an asteroid field and initiate scans. The Ustur builder’s upgrades to your ship work like a charm. Systems reveal six rocks packed with the super-rare subsurface ore, some of the rarest minerals in the galaxy.

It takes time to mine. Your ONI fighters are on edge because they know the marauder who got away will return with reinforcements for a second raid. Indeed, your ships’ systems sound an alarm: seven incoming drive signatures.

You’re outnumbered, and you consider punching out, but your fighters say they’re ready to mete out some justice. The fight is over in mere minutes. All seven marauders are blown to pieces, but so is your escort — and all his tokens are burned. In the wreckage of destroyed enemy craft, you spot a container of very rare material for crafting a powerful warship component. You capture it, knowing the file is worth a small fortune.

You complete the extraction and deliver the materials to the Ustur builder, who has secured new land parcels with the profits from Bar Aria. They’ll build a new R&D facility and promise to keep you in the loop about ship upgrades. You offer the rare crafting material as well, and they offer more than double the ATLAS that you expected as payment. All-out war is just over the horizon; the Ustur will have no shortage of clients.

Star Atlas is a vast cosmic expanse where unlikely associations and factional strife create new experiences every day. As an explorer, you’ll be the first to uncover the wealth and secrets in unexplored corners of the void, and soak in the unforgettable views of the galactic wilderness.

*Train hard, arm yourself to the teeth and dominate a vast metaverse while earning ATLAS* 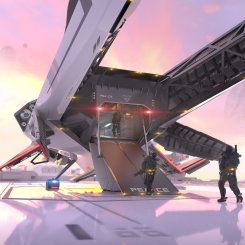