This edition of The Atlassian is brought to you by Star Atlas… the next-gen gaming metaverse where you live out your dreams.

The journey to reach our N° Star has thus far been an interstellar experience. Across all facets of our star ecosystem, (Marketing, Design, Production, Development, and Operations) our working efficiencies are taking priority along ongoing management optimization frameworks. It’s truly inspiring to witness the ReBirth of a metaverse°

This work would not be possible without the support of our community. Much light to you and yours. Co-founder & COO, Pablo Quiroga.

How is Star Atlas gearing up for the lift-off?

A Note from the CEO’s desk: Michael Wagner - “Power to the people!” Many have claimed that a fully functional perpetual metaverse is an impossibility. In most historical cases, this would have been an accurate conclusion. However, the collective ‘we’ exist within an emergent innovative frontier. The combination of technological evolution and financial revolution has given rise to a new class of assets.

As we embark upon the journey of life within the Star Atlas Metaverse, it is important to pay homage to the contributions of those before us, without which, none of this would be possible. To the misfits. To the rogues. And to the renegades who refused to accept the imposition of the will of the powerful. Without this unique class of individuals, which form an alternative collective ‘we’, nothing we are working on at the Star Atlas team would even be feasible.

The future we are building within Star Atlas is that of a true alternative digital life. Fueled by genuine opportunity for the industrious, experimental and alternative governance systems, social inclusion for all, and true fundamental economics. For the first time in history, the line between real currency and digital currency can be blurred sufficiently to foster a true alternative economic system. One which resides both inside and outside of an alternative virtual reality at the same time. Schrodinger’s Economy, if you will. Prior to blockchain, cryptocurrency, and the proliferation of decentralization, none of these concepts could be brought to life. The ‘elite’ ruling class would not allow it.

How is Star Atlas gearing up for the lift-off?

Whenever our prehistoric ancestors gazed up into the night sky, they understood that the stars shining above were both the past and the future, the place of their origin and of eventual return. Among many things, they saw the firmament as a generative force whose state directly guided and influenced their own.

Another big question we’re mulling over is culture. Not in-game culture, team culture (though the Oni are looking pretty fly). It’s the little decisions we make and conversations we have now, early in the project, that will have long-lasting effects on the team and the quality of our game. While it’s still an ongoing conversation, we’re clear on two goals: one, to create an environment for our engineers that stimulates creativity and two, to be uncompromising in the quality of our work. The universe we’re creating is immense, and to not realize that vision would be a sin.

## The Official Star Atlas Newsletter: Dev Edition Delivering you original long-form updates covering our latest news and backstage sneak peeks. This edition of The Atlas Star ✧ is brought to you by the Star Atlas Engineering Team… reporting from the frontier of very next-gen technology. 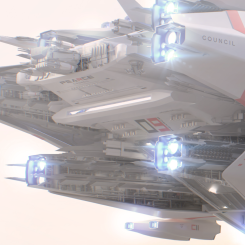