Brace yourself for four heavily anticipated new intergalactic spaceships, which will now also be available for purchase with the in-game ATLAS currency.

(Article has been updated to reflect the correct pricing details)

On Tuesday, November 9, 2021, starting at 10 AM PDT and rolling on the hour, no less than four spectacular Star Atlas ships will become available on the Galactic Marketplace.

Thanks to a Galactic Marketplace feature expansion, these and all existing ships are now also available with an extended array of in-game item stats and features, including Crew roles, Component slots, and Module slots. Furthermore, with the update, all ships will include expanded item galleries with action shots, component previews and schematics, a precursor to the upcoming Showroom feature.

The fourth ship wave will also debut a new feature, which is payment with the Star Atlas in-game currency, ATLAS. The availability of each new ship’s supply in WAVE 4 will be in a 50/50 ratio of ATLAS and UDSC, half of the quantity set for purchase exclusively with ATLAS and the other half exclusively with USDC, after which they will continue to trade in both markets simultaneously.

The same feature will roll out to all existing spaceships on the Galactic Marketplace. Each ship will receive the option for trading on both the ATLAS and UDSC markets. For the time being this will not apply to other in-game assets. Finally, unsold factory inventory of ships from previous drops will be split between both markets evenly.

The four new spaceships are Pearce R8, Rainbow Om, Vzus ambwe and Pearce C9 respectively. Each one features its own countdown to sale start on the Galactic Marketplace.

The first drop is Pearce R8, a sturdy and indispensable deep space R&R (refuel and repair) ship of large size, with an end-to-end length of 140 meters (460 feet).

The Pearce R8 is a mechanical innovation combining two major ship functions into one. The R8 contains a large cargo hold to store scrap metal for performing open space repairs. It also contains two additional fuel modules which serve as refueling canisters for all ships. These refueling canisters can also be jettisoned directly into the Pearce C9 for a rapid refueling service. The command deck rotates 180 degrees to enable the onboard command crew to focus on refueling duties or turn around and activate the repair arms. All accommodations are onboard this ship for long escort missions or for exploring into the unknown and being prepared for many types of support missions that may appear on radar.

Rainbow Om is the masterpiece starship that emerges when the best human and Photoli designers collaborate to achieve perfection. This comfortable, multi-role ship is an enigma of space travel that will arrive you in style without realizing you’ve just effortlessly covered half the distance of our known sector.

The third ship is VZUS ambwe, a specialized vessel for some of the toughest and most adventurous galactic pursuits, with a wingspan and a length of 25.5 meters (84 feet).

The VZUS ambwe is specifically crafted for those long journeys on the trail of your next bounty. This small bounty hunting ship has full life support amenities for you and your captures. The ambwe’s onboard firepower is enough to make quick work of your cornered target. VZUS branded stealth features reduce overall energy output to fly under the radar and execute that surprise attack.

The fourth ship without any need for introduction is Pearce C9. This capital class spacecraft carrier can enforce peace merely by its appearance in a troublesome sector. With an end-to-end length of 400 meters (1312 feet), it offers the possibility to assemble a large crew.

The original crowning glory of Pearce manufactured battleships, the C9 capital carrier comes stock fitted with commander sized weaponry and best in class hull plating. The capital drone port houses a team of Pearce Hulltank attack drones. A generous sized top deck and adjacent hangar bay allows an effective sized fleet of varying sized ships for tactical deployment, cargo and vehicle transport and maintenance. An oversized command deck creates the best tactical viewpoint and strike team for any security focused Captain and crew. A ship or fleet out in deep space will measure twice and think again before engaging the C9 and the crew can rest or work safely knowing the power they wield at the helm of this highly equipped space platform.

The countdown is on. The drop begins on November 9, 2021 at 10 AM PDT on Galactic Marketplace.

A deeper dive into how a single intergalactic relic can inspire epic adventures and bitter betrayals on the edge of the metaverse. 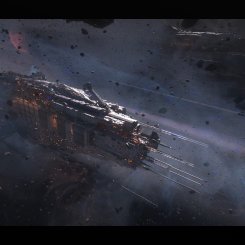