Crowning of COEXIST as the guild champion caps a celebratory full day of events.

Across the galaxy and across the ages, June 16, 2022, will go down as a historic day, a moment when the three great factions of Oni, Ustur and Mud set tensions aside and came together to participate in the first ever Council of Peace Assembly (COPA).

It was a thrilling, entertaining, and at times, raucous virtual festival that included everything from guild presentations and Star Atlas product announcements to GIF storms set off by blazing DJ sets and special guest appearances, including Twitch co-founder Justin Kan and King Perez from festival sponsor iBUYPOWER.

As a testament to the high level of entertainment value of the event, the number of assembly attendees remained relatively constant at 450 to 550 people throughout the entire seven hour festival, with additional numbers watching via guild channel livestreams on Twitch and Youtube.

The first ever COPA Guild Pitch Competition saw 15 finalist guilds presenting a wide variety of compelling presentations, making the final decision for the judges difficult. In the end, they awarded first prize to the COEXIST guild. Founded in 2007, the only guild in the competition based in the ancient Earth territory of Turkey won the prize of $5k USDC worth of spaceships.

A field that started with 39 entries had previously been whittled down to 15 finalists. Each of the guilds had ten minutes to present a vision for their future within the Star Atlas ecosystem and five minutes to answer questions from a very special panel of judges.

Revered representatives of the Ustur, Oni and Mud factions teleported across time and space to attend as judges at the event.

The judges graded the guild presentations on three criteria:

Growth: Guild’s plan to expand in users, resources, and assets

Congratulations to all of the winners and to all guilds who participated.

The audience award from festival sponsor iBUYPOWER — a top of the line, commemorative, Star Atlas-themed gaming PC tricked out with, among other things, a Nvidia RTX 3090 graphics card — went to Khelmeth | Kerenia#8522.

In addition, King Perez of iBUYPOWER, a Star Atlas fleet owner himself, announced on the Main Stage a surprise additional giveaway of five eclipse HG10 wireless headsets with Bluetooth and a 30 hour battery life, the ultimate gift for the ears of any serious gamer.

The Star Atlas community thanks iBUYPOWER for their generosity in offering all of the prizes and for making this special day possible.

A New Kind of Festival

This virtual COPA festival was held entirely over Discord with the help of community moderators around the world.

Star Atlas Co-founder and CEO Michael Wagner kicked off the proceedings with an inspiring keynote that reminded everyone of the long term goals of Star Atlas as a game, a metaverse and a community. He pointed out that, unlike others in the space, when parent company ATMTA Inc. considers the future of Star Atlas, it thinks in terms of decades and even centuries.

Michael also mentioned that the Star Atlas team sees COPA as only the first of many community-driven events — including future hackathons — which will aim to stimulate creativity and innovation.

Special guest DJ BassJackers arrived around midday and got the virtual crowd going absolutely berzerk with an epic dance jam. The avalanche of dancing GIFs sent by the community quickly blew the top off the Main Stage Chat channel which had difficulty keeping up with the intense level of traffic.

At a midday break, Vivian Rosenthal from Frequency Mind led a recuperative and consciousness-raising breathwork session that helped rejuvenate attendees for the second half of the festival.

A number of guests stopped by the Main Stage throughout the day. Matt Sorg, who leads tech and product development at the Solana Foundation, stopped by to say that his team at Solana is watching and admiring Star Atlas from afar.

Star Atlas team members also made guest appearances, including Estefan Ramirez, Head of Growth. Estefan talked about some of the current partnerships, including with Kudelski Group, iBUYPOWER, MoonPay, and Sandbox; along with future partnerships that are in the works with a wide range of brands, leading tech firms, artists and culture leaders. “If Star Wars and Disney had a baby, that’s us; that’s Star Atlas! The sky’s the limit really.”

In a “Mini Town Hall” that concluded the day’s events, Michael Wagner joked that his catchphrase for product launches coming in “4–6 weeks” is back on the table. He went on to list a slew of major releases that the team will be announcing in that timeframe.

The Show Room — A UE5 social experience and tech demo from Volant Studios that can be entered in 1st or 3rd person and used to inspect and buy ship assets, hang out with friends, etc.

Graphic Novel — A comic book prequel to the current (2620) setting of the Star Atlas game that will first be released in a digital form every couple weeks. NFTs can be redeemed for physical copies. Hint: Look for Easter eggs in the Showroom.

POLIS DAO — This feature coming out in July will give players the ability to stake POLIS, view your balances, voting weight, and eventually allow you to participate in governance within the Star Atlas ecosystem.

Marketplace 2.0 — This superior, game-worthy update to the current marketplace will simplify the process of purchasing and selling ships, among numerous other benefits.

Referral Program — At an earlier guest appearance, Anthony Mason, Head of Marketing Intelligence at Star Atlas, shared that a referral program will be launching in the coming weeks. In conjunction with the new Marketplace, it will allow current players to be rewarded for bringing new players into the ecosystem.

SCREAM — Mo Yazdani is the Product Manager on SCREAM. As he discussed as a presenter at COPA, SCREAM will be released later this year as a blockchain-native game that integrates politics, economics, and military gameplay mechanics of the Star Atlas metaverse. We couldn’t be more excited.

All in all, the coming season looks to be nothing less than a #StarAtlasSummer.

All in all, a tremendously fun and historic day, one that participants will remember for years to come. Again, congratulations to all winners and participants, and especially to the Star Atlas community as a whole. There were numerous expressions of gratitude in the chat channels for a much neeeded emotional lift. Whatever the future brings, be it alliances or armed conflict, today it was great to simply be together as a united community.

And now, looking ahead, the excitement and anticipation for an even bigger COPA II has already begun.

*Star Atlas publishes details on COPA, reveals a list of 15 guilds that will battle for epic prizes, and shares more information on how anyone will be able to win a legendary Star Atlas gaming PC by iBUYPOWER.* 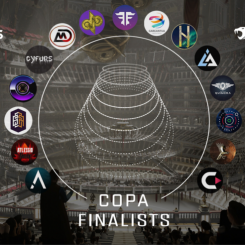