The Metaverse Big Bang: Star Atlas Launches the Next Generation of NFTs through Galactic Asset Offering

The first in a series of drops of game-changing NFTs in the Galactic Marketplace are state-of-the-art spaceships featuring next-gen design, Unreal Engine 5 real-time graphics and never-before-seen metaverse utility.

As the inaugural unveiling of next-level NFTs to the world, Star Atlas has launched a Galactic Asset Offering (GAO) on September 7, 2021. The ongoing event brings all players, enthusiasts and collectors a once-in-a-lifetime opportunity to be part of the future by owning some of the most advanced metaverse NFT assets in existence.

During the GAO, assets are being rolled out individually in limited quantities that will satisfy the initial demand from the community and meet the needs of collectors seeking to get their hands on the very first generation of AAA-grade metaverse NFTs.

Depending on inventory, the assets on offer will follow a simple step-pricing model that rewards early participants while giving the fans who were not fast enough a fair treatment, giving everyone the chance to assemble their desired fleet.

The first two waves of assets come in the form of a range of spaceship NFTs, with sequenced countdowns to drop time displayed on their Galactic Marketplace page. The rarity of spaceships increases based on ship class.

As a Genesis Generation of the ships, any consideration of a future release will be carefully measured against the data of capital inflows in the metaverse, asset deflation and any degree of inflation based on supply.

Future releases of the Galactic Asset Offering may also include other assets, but will not include Claim Stake NFTs, which are in the Marketplace due to being dropped to the recipients of Meta-Poster Rewards.

After the supply of assets on offer is exhausted, the items are available in the secondary marketplace on their Galactic Marketplace page, joining meta-posters and other assets like the Tigu space cat already trading there.

The smaller sibling to the Opal Jetjet, the Opal Jet mimics the oversized engine block for blazing fast speeds on the racetrack. The Opal Jet is a one seater space racer capable of warping planet to planet. Packed with enough firepower to throw cover fire and then slip away in a wink. Enjoy insane speeds, no license required!

Pearce’s X5 Car is a shapeshifting, two seater, nimble fighter and starship. It has four different primary modes of operation. (1) Attack mode with all weapons pointing forward. (2) Speed mode with all thrusters pointing to the rear. (3) Normal mode with the weapons and thrusters split to the forward and read. (4) Defense mode with the arms retracted and hull plating with the largest coverage. The X5 Car is the stock patrol vessel for the Council of Peace with a pervasive presence throughout secured faction territories in space and on land. Be sure to earn your pilot’s license to take this through faction space.

The Calico Compakt Hero nestles nicely into the Guardian’s hangar for distant shuttling or away team expeditions. Manufactured under the cost effective Compakt supply line, the styling is more suitable for rough exploration rather than traveling in high luxury style. Should the expedition carry on longer than planned, the Compakt Hero has fully sustainable life support capabilities onboard this medium sized, multi-crew, multi-role ship. Utilize the standard medium cargo hold and additional fuel module for freight lines to bring in some additional capital when traveling long and far in the comfortable interior accommodations. Enjoy the panoramic views of the nearly all glass ceiling on the top deck making the long flights a sight to behold from any angle of the ship. Additional VTOL and side winglet thrusters make this a highly maneuverable ship if things were to get hairy when deep in unknown territory. This robust ship is destined to help you survive and thrive among the stars.

The Ogrika Thripid is a testament to glorious super luxury Punaab culture while demonstrating powerful and brutal strength. This large and heavy fighter also has a powerful rudder thruster for unusually quick maneuverability for a ship this size. The massive forward facing cannons are positioned to obliterate any enemy on the business end of the Thripid. On top of being an arsenal powerhouse, the interior provides a very comfortable and equally luxury accommodations.

The Captain of a ship of this magnitude can utilize the weaponry to establish a very safe escort environment while enjoying the lush amenities for long distance space travel with a huge boost to peace of mind.

This is Pearce X4. A space-worthy, single passenger space bike that packs a punch. A popular model for short range COP patrols in space and on land. No pilot’s license required to explore distant exoplanets on a whim with the best, fully unobstructed view Pearce can offer. Comes standard with a bit of cargo space for those extra long trips through the vast, open range of outer space.

Often thought of as the fastest modifiable, two seater, space racer vehicle, the Opal Jetjet growls its massive engine block and utilizes its forward and rear weapon turrets to overtake other would-be competitors on the racetrack. Coated in pure style from bow to stern, this ship can whip you across the track almost as fast as it can warp you across the sector. A comfortable and classic interior provides a familiar callback to an ancient and timeless aesthetic that humankind will never forget.

BYOS stands for Build Your Own Ship. Fimbul offers a full do-it-yourself package for the starship mechanic who likes to get their hands dirty. We do not guarantee all parts have survived their space trek to your doorstep but our handy guide will help you find a suitable replacement at a nearby scrapyard. Once assembled, your Packlite provides cozy and sufficient amenities for the space dweller who is resilient to life on the open slowave sea. A robust cargo hold can extend beyond its walls to take on those extra chunky hauls that pay the big bucks. If you need any extra room, reinforced mycellium bungies will ensure you use every last inch of cargo space. For the frugal cargo freighter, the Packlite is your dream boat.

Calico’s flagship multi-role, exploration vessel, the Guardian, is a marvel of modern spaceship technology. Clean, sporty and full of utility, this capital ship can be the home of an extra large crew destined to comb the furthest reaches of the known and unknown sectors of our galactic neighborhood. All imaginable creature comforts and sustainable bio practices onboard this ship put the crew of any Guardian at ease as they explore for new life and new biomes. Packed with two extra large chambers of explorer drones and dual cartography navigation rooms, the Guardian also doubles as the space charting headquarters for any and all exploration or data validation fleets. Comes standard with a double decker theater for keeping the crew entertained with the latest the metaverse has to offer in live, hyperlive and streaming entertainment. Stacked with massive turret cannons for heavy defense, if you had to choose only one ship to get you through your entire space life and career, you cannot possibly go wrong with the Calico Guardian.

An asset drop will happen every Tuesday and Thursday. Stay tuned for more information on those in the near future.

As with any birthing process, some initial uncertainty and chaos are possible in a metaverse Big Bang due to the immense interest from the worldwide community of enthusiasts, so we ask for your patience in case of encountering early glitches. At the same time, the volume is also a validation of our hard work of creating the next-gen metaverse for the people. As an Ustur proverb says: Once stardust settles, life begins. 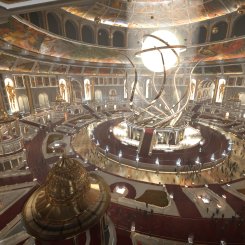