There have always been significant milestones in the world of gaming and computer generated reality. Pivotal moments have forever changed the way people play games and interact — the introduction of arcade machines, the PLATO network system, the LAN party, and now, NFTs, which use blockchain technology to uniquely identify digital objects and enable verification of their authenticity and rarity. The gaming industry is beginning to use NFTs as in-game assets, reimagining what it means to earn or own an in-game item.

This is only the beginning. NFTs will affect how we work, live, play games, and earn a living. The mission of Star Atlas is to ensure that this epochal shift first and foremost empowers the people.

In late 2017, the game Cryptokitties shocked the world with its success. Cryptokitties was one of the earliest examples of NFTs used in the context of a collectible game item. The most expensive collectible cat ever sold in the game was valued at $117,000, which just goes to show the potential of decentralized gaming.

In the four years that have followed, several other products have sprung up that go even farther and there is almost no genre that isn’t being explored for integrating decentralized assets.

Decentralized gaming provides gamers what they truly need — the Star Atlas economy is based on principles of transparency, fairness, and immutability, eliminating the possibility of fraud and allowing players to start earning in-game rather than spending, exchanging their time and effort for tangible and potentially life-changing benefits. NFT items can be traded inside or outside the game ecosystem and staked or lent/borrowed with rewards.

For traditional console, online, and mobile games, gamers were essentially money-makers, purchasing in-game assets to generate profit for the game company and its shareholders. If a gamer’s account got stolen, disabled, or even if the user just became bored and switched to another game, the money they spent was essentially gone. Now, however, there is an NFT-based alternative that will turn the traditional world upside down.

By using NFTs for in-game items, players wholly own and control what they buy, earn, or craft. In addition to proving your asset is really “rare,” in-game assets as NFTs mean that these items can be purchased, sold, or traded, potentially enabling assets to be moved beyond their original utility or purpose. The biggest benefit that NFT game assets bring is that they allow players to retain the value (and money) that they put into these items in the first place.

Once you’ve got an NFT asset, now what? In Star Atlas, there are several options you have with your NFT. For example, let’s say it’s one of the spaceships dropping as part of the Rebirth meta-poster Loot Box Rewards on August 31, 2021. You can trade your ship for other items, sell it for the upcoming ATLAS token, the metaverse’s cryptocurrency, either within the Star Atlas Marketplace or peer-to-peer. You can even take it to a third-party NFT marketplace and trade it there.

The secret at the very core of Star Atlas is its fully integrated Serum decentralized exchange (DEX) protocol that allows users to freely manage all of their assets and trade them. With nearly instant settlement times and virtually zero operating costs, there isn’t a better fit for scaling the economy. As NFT asset trading proliferates, the reach of the Galactic Marketplace will expand exponentially with its metaverse, creating value both for users as well as the projects.

Anything can be an NFT — skins, outfits, visual enhancements, weapons, land, maps, names and much more. One exciting benefit of this arrangement is that NFT game assets may expand beyond the use they were initially created for and take on an entirely new life within the metaverse. For example, what if you could use a Pearce X4 space bike as a key that enabled you to start any racer model of a self-driving vehicle parked on your street? In that case, the value of that NFT would go up if you wanted to sell it or trade it on an exchange due to its broader usability.

As more use cases are revealed going forward, it’s only a matter of time before a broad adoption of the decentralized blockchain-based marketplace model will attract enough people to create a thriving metaverse economy that will rival the one in the purely physical world.

Where everything comes together

With the launch of the Galactic Marketplace, an unstoppable sequence of events has been put into motion.

It all starts with the ability to freely create and transfer goods in the metaverse. The next step for completing this paradigm shift is handing over power to the people. The DeFi space within the larger world of cryptocurrency has created opportunities for the gaming industry that are permanently changing the way we not only play but also interact. DeFi enables Star Atlas to give users full control of their assets. When you buy an NFT space suit, it’s yours. Forever. Use it, sell it, trade it, stake it; the choices are endless. Your choices, that is.

That is the Serum DEX comes in. This complete, non-custodial spot and derivatives exchange (DEX) runs on an on-chain central limit order book (CLOB) on Solana’s mainnet, the perfect match for an active in-game economy and a high volume of NFT trading in the Star Atlas metaverse that gives everyone a feature-rich marketplace to manage all of their asset transactions. With nearly instant settlement, virtually zero operating costs, and a robust API for DeFi tools, Serum’s decentralized exchange protocol fulfills the needs of the Star Atlas economy and the future of gaming.

There’s a feeling of empowerment that NFT in-game assets deliver to the player. The Star Atlas metaverse is forging a path to a more exciting future in gaming and life at large, and if players can get more use out of the deep space mining equipment, skins and other assets they purchase, the adoption of NFT in-game assets might spread faster than you could possibly imagine.

Stay tuned for updates to our Galactic Marketplace as we expand the metaverse at an accelerated pace.

Sign up here for the official Star Atlas newsletter to be the first to know about the latest metaverse developments and feature releases.

Star Atlas NFT Debut Gives a Taste of the Metaverse 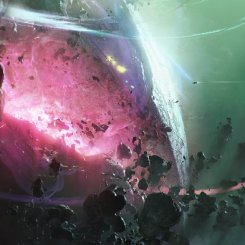