Star Atlas is a gaming metaverse powered and secured by the blockchain — not just any but the ultra-fast Solana blockchain. Players are thrust into the middle of an intergalactic conflict and embark on an odyssey that will take them to the deepest reaches of the galaxy to gain clout in one of three main factions holding up universal peace.

As the Metaverse Economics & Governance Paper lays out, the game is supported by a dual token system that represents operations and political influence. Both are linked with real world economic incentives, which creates a unique gaming experience that mimics real life conflicts.

What is a utility token?

What is a governance token?

Tokens for a realistic and complex intergalactic conflict

As the Metaverse Economics and Tokenomic Paper reveals, Star Atlas has gameplay innovations across the board, supported by both utility and governance tokens, which enables players to fully experience a multifaceted intergalactic conflict that blurs the divide between the real and the virtual.

Set in the year of 2620, you’re transported a metaverse of the future where several factions controlled by humankind, alien races, and sentient androids are caught in an ongoing struggle on the edges of a peace treaty. As a player you’ll fight for resources, territorial conquest, and political domination. To mimic the complexities of real-life politics, Star Atlas is driven by a dual token system of ATLAS & POLIS, which allows Star Atlas to create a tug-of-war between players in two different verticals. Political influence is represented by the ownership of POLIS, and in-game transactions like buying items are supported by ATLAS. Together, these tokens rival any real-world economy and governance with layers of intricacy to the gameplay.

ATLAS — A token as in-game currency

ATLAS is a native utility token in the Star Atlas ecosystem. Players will be required to leverage ATLAS to acquire digital assets such as ships, crews, and lands.

Essential to players in their initial quests, ATLAS greases palms and makes the world turn just like a real-world economy. Players will need to find ways to maximize their gains and incomes while balancing the necessary expenses of their quests. Choosing wisely on where to spend your ATLAS in the game is key to your success in the metaverse. Should you buy extra fuel to reach a distant star to uncover riches or to outfit your spacecraft to enhance its combat functionality? Star Atlas will challenge players to think about how they can chart the most lucrative course of action with minimal cost.

As a play-to-earn game, the ATLAS you earn in the metaverse can be traded or sold on a secondary market, allowing users to monetize the time they have invested in their Star Atlas adventures.

POLIS — A proxy of political influence

POLIS is a governance token that represents all-encompassing jurisdictional power in the metaverse. Players can take another approach to exert their dominance through holding POLIS, which serves as a pivotal role in setting the dynamics and between different guilds.

In the quest of fighting for dominance in the expansive metaverse, it is strategically important to form guilds, organize in a myriad ways and combine resources to thrive in the universe of Star Atlas. One of the ways to do it will be through the implementation of Decentralized Autonomous Corporations (DAC), where the entire space cities and dominions can be constructed with their micro-economy influenced by powerful players.

All of it boils down to how players dominate through strategic cooperation and utilization of resources with other players. The POLIS token here plays a pivotal role to endorse political clout to enforce policies over a certain region. An example would be for a DAC to impose road tax on those outside the DAC to gain access to independently owned cities.

Usage in the real world

Outside of the Star Atlas metaverse, the POLIS token represents the tenet of decentralization — holders of POLIS will ultimately be able to influence the game’s development. POLIS holders can vote on the game economics (i.e. inflation rates), asset release schedules, and game direction, following a few-year period of team-led development in the initial stage of Star Atlas.

The dual-token system creates an innovative dynamic unique to Star Atlas, both in-game and in the real world, and paves a way for the socioeconomic model of the future.

Read the Star Atlas Economics and Governance Paper outlining the tokenomics of ATLAS and POLIS and much more.

Introducing ReBirth: Genesis of a Metaverse 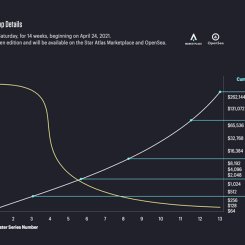