The next-gen gaming metaverse has unveiled an economics document with far-reaching consequences for the human understanding of gaming, blockchain, economics and culture at large. Created in collaboration with economics experts at The Republic, the paper lays the foundations to a socioeconomic system for the future.

After the launch of its Galactic Marketplace for trading, and the announcement of the sale of utility and governance tokens, Star Atlas is laying out its long-term vision for a thriving, autonomous, player-owned gaming metaverse, which is fully self-sustainable, controlled and funded through decentralized governance.

“Star Atlas has been designed since inception to empower a new generation of gamers, creators, and dreamers to rebuild the world to alternative constructs and standards. A true digital ReBirth of the human species. We choose to build a metaverse and MMO embodied by true self-sovereignty. The vision for which would be impossible individually, but inevitable collectively.” — Michael Wagner, CEO of Star Atlas

In addition to the existing Whitepaper, the Metaverse Economics Paper details four pillars to the Star Atlas economy: In-game ATLAS and POLIS tokens used as mediums of exchange and governance, land ownership across the galaxy with safeguards against unproductive accumulation, NFT-based in-game items and characters, and abundant deep space resources.

The innovations in the published paper lay out a blueprint for a full scale token-driven metaverse economy with complete self-governing ability. It also unveils a completely revolutionized way of organizing through Decentralized Autonomous Organizations (DAOs), including autonomous guilds and deep space corporations.

The cornerstone that enables Star Atlas to make this leap is its powerful technological backbone, which enables a near-serverless operation on the light-speed Solana blockchain, the use of sophisticated trading and finance tools through Serum and harnesses the power of Unreal Engine 5 with Nanite, along with anticipating other futuristic technologies as extensions to the metaverse. The ground-breaking Metaverse Economics Paper is available for reading in English on the Star Atlas website.

Star Atlas is building a thriving, self-sustainable, player-owned gaming metaverse with fast, intuitive tools enabling the humanity to reimagine its own future. 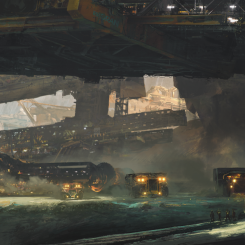