In either case, fear not!

Guilds are not as intimidating as they may sound, and this article will help guide you along either path.

If you haven’t already done so, go to the Star Atlas website and connect your Solana wallet. This will allow you to purchase ships and begin to grow your galactic fleet.

You’ll then be asked to join one of the three main Star Atlas factions.

Note: Every member of a guild/DAC has to be a member of the same faction and many guilds are associated with a single faction. While there are some multi-faction guilds, to some extent your choice of faction will determine which guilds you can join.

A guild is a group of like-minded individuals who come together to pursue a common goal. All players are encouraged to join a guild. That’s because being part of a guild offers a competitive advantage in that they are typically set up as Decentralized Autonomous Corporations, or DACs. This allows a group to work collectively, share profits, and pool resources, including ATLAS, POLIS, ships, etc... Guilds can even build entire space cities and outmaneuver competing guilds.

Some guilds share a common language (e.g. Spanish) or specialize in a certain profession or activity, like piracy, entertainment, resource mining or ship manufacturing. It’s best to do some research and learn about a few different guilds before making your choice.

The number of guilds is always growing. Some guilds and other third-party sites have created a list of guilds that you can browse.

Please note that guilds and DACs are entirely created, owned, and run by community members and players — and not by ATMTA, Inc. (developer of Star Atlas). ATMTA, Inc. is not affiliated with and does not endorse any guild or DAC. Please take care and do your own research when joining a guild or DAC.

Our aim is to soon release a complete DAC system, which allows players to officially register their DACs in the Star Atlas metaverse and use our many governance tools to customize their guild structure, ranging from voting to the administration of its treasury, all in a permissionless manner.

While we are still developing that system, DACs have been organizing themselves through social networks, like Discord or Telegram, allowing communication between members and discussion about guild values and goals.

If you are looking to create your own guild, your first step is creating a Discord server or Telegram group and asking your first members to join you there to discuss your shared vision for your guild’s future in Star Atlas.

How do I join the Star Atlas community?

Our dedicated Discord server is the best place to join the Star Atlas community, engage with other community members, ask questions, and have fun. You can also follow Star Atlas on the social platforms listed below.

Star Atlas and iBUYPOWER Partner to Onboard Gamers to the Metaverse

Introducing COPA — a Festival of Guilds

The first-ever Council of Peace Assembly brings together Star Atlas guilds from across the galaxy — and __you are invited.__ 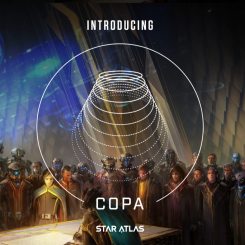