Star Atlas combines state-of-the-art blockchain technology with a metaverse the size of a galaxy where players can explore and earn on their odyssey through the awe-inspiring deepest reaches of outer space.

The ethos of the Star Atlas development team is to encourage the liberation of time spent in this virtual world and emphasize the ability for this value generation to transcend the virtual to the real world and establish sovereign metaverse feedback loop.

Digital assets owned always belong to the holder that are kept safe in a wallet and earned crypto assets can be converted into other exchange mediums at the push of a button.

ATLAS will serve as the native in-game currency within Star Atlas. Unlike the governance-focused POLIS, ATLAS is the driving force behind operating costs and revenue within Star Atlas. It will be required for utilization of actions such as ship repair, refueling, purchasing consumables, replacing worn-out equipment, and paying Land Value Tax.

While the upcoming Galactic Asset Offering will be USDC-funded, players might eventually be able to spend ATLAS to acquire digital assets such as ships, crew, components, land, and equipment.

Players hoping to strike it rich in Star Atlas will need to carefully prioritize how much ATLAS they use in the metaverse with how much income they can earn with their time. ATLAS will serve as the in-game currency to purchase assets or items from an NPC merchant or directly from a player (peer-to-peer), such as personnel for mining equipment, fuel for ships, and repairs for damages, as well as serve as the predominant currency within the NFT marketplace.

The majority of assets traded on the Marketplace will be earned doing in-game tasks but can also be purchased from the pre-sale and exclusive future sales, which will enable users to get a hold of exceptionally rare and unique items like commemorative spaceships. Other players will place bid offers or settle immediately for the price limit.

DeFi Economic System of the Future

Powered by the Solana blockchain and Serum protocol, Star Atlas provides real money-making opportunities for metaverse gaming participants. Instead of playing prescribed roles to earn video game points which can then be exchanged for real-world currencies on grey markets, Star Atlas enables open-ended creative experiences that are monetizable across the metaverse via ATLAS and NFTs. Here are some of the key decentralized finance functions that Star Atlas can facilitate:

Star Atlas has announced a partnership with Yield Guild Games (YGG), a community leader in uniting play to earn gamers. Through the partnership, YGG will enable metaverse participants to lease NFTs on the in-game Star Atlas DeFi marketplace.

YGG’s mission is to gather gamers around the play-to-earn metaverse and invest in assets that help those players earn yield. One such example is in the Philippines, where the NFT game Axie Infinity has enjoyed massive popularity. In mid-June, YGG reported 1,000 scholars around the world playing the Pokemon-inspired game, who have earned more than 14 million in-game tokens known as Small Love Potions — equivalent to about $1.9 million.

YGG’s $4-million Series A investment in Axie Infinity, completed this June, will expand this network by purchasing and lending out even more NFT assets.

YGG allows players to earn yield by operating, selling, or leasing collectibles in-game. As NFTs, these items are uniquely distinguished and monetized based on the value ascribed to them. Thus, no matter their location, players can generate income by operating and selling these leased in-game objects within Star Atlas.

Star Atlas players can stake assets with real-world value to grow their in-game corporate empires, discover unique and distant alien worlds, and battle in high-stakes combat. The confluence of various technologies presents a unique opportunity for the future of finance, video games, entertainment, real-world professions, and blockchain, where people are freed from the chains of centralized platforms and can make a living based on their tame and effort, and have a lot of fun doing it.

The Metaverse Big Bang: Star Atlas Launches the Next Generation of NFTs through Galactic Asset Offering

Star Atlas is a gaming metaverse powered and secured by the blockchain — not just any but the ultra-fast [Solana](https://solana.com/) blockchain. Players are thrust into the middle of an intergalactic conflict and embark on an odyssey that will take them to the deepest reaches of the galaxy to gain clout in one of three main factions holding up universal peace. 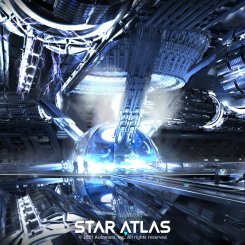