How Money is Made in a Metaverse

Star Atlas is ushering in the future of video games with an immersive metaverse where players are rewarded for the time spent exploring the deepest regions of outer space.

Things have changed a lot from the arcade days where you would put in a quarter to play a round of Space Invaders. The first business model for video games was exchanging money for a teeny bit of entertainment time. When games moved out of shopping malls and became connected online a new phenomenon started — you could exchange time played in a video game to earn money.

Games like Ultima Online and Everquest were pioneers that brought thousands of players together in a virtual world. Playing with your friends and showing off your legendary loot was fun. Spending time clicking on goblins to kill wasn’t. The companies that made these games didn’t allow virtual gold to be sold for real money. Trading virtual currency was against their terms of service and you could be banned from the game if you were caught. Nevertheless, a secondary market for virtual gold still emerged, but the process of buying and actually exchanging dollars for UO Gold was complicated since it was frowned upon. First, you have to put a credit card into a sketchy online portal and after the transaction completes you have to meet the person in-game to claim your gold. Oh, the player delivering your gold needs to be on the same server and, if they’re really fast, they can drop gold on the ground and pick it back up before you can take it.

The virtual gold market exploded with the popularity of World of Warcraft. Trading gameplay time for money was lucrative and companies sprung up specifically to sell in-game gold. But virtual gold can only buy so much.

Epic swords aren’t bought, they’re earned from completing quests or gathering materials to craft them. Everyone wants the best gear, but it might take 100 hours to get that coveted dragon slaying sword. A new group of players emerged that would collect rare weapons and armor to resell to players. Games with crafting systems had players who specialized in leveling up their crafting skills and they became virtual blacksmiths that could earn real money for making a digital shield.

While most online games shunned enterprising players, Second Life embraced them. Liden Labs’ online universe has a thriving marketplace where players can purchase virtual clothes, and even a virtual island to chillout on. Second Life players exchange Liden Dollars to buy items from other players and the in-game currency can be liquidated for cash. Players that were serious about becoming a tycoon, like Anshe Chung, could make a fortune. Anshe built a business from designing Second Life Fashion and recreating real-life places into the game. She expanded her business into being a Second Life landlord and became the first virtual millionaire.

Business Booms with the Blockchain

Blockchain news is buzzing about play-to-earn games like Gods Unchained and Axie Infinity. These games have robust economies because the power of the blockchain takes established money-making methods from the dawn of online gaming and streamlines them.

Buying virtual gold isn’t a byzantine process anymore. You don’t need to meet up with a stranger on your server after plugging in your credit card online hoping that the drop will go smoothly. You can exchange tokens using the same wallet you use for other transactions and let a trusted marketplace smart contract give you what you want.

Virtual swords and shields can be stored as non-fungible tokens (NFTs) where they can be traded in an open market. They’re not locked to a server or even a specific game. The NFT is stored in your wallet and it can be used or even loaned to a friend where a managed smart contract ensures you’ll get the item back after a set period of time.

Moving to a Metaverse

Star Atlas is revolutionizing the idea of what a play-to-earn game can be with its immersive metaverse. Players can earn money by selling items which are represented as NFTs in our online marketplace and exchanging ATLAS tokens. The game has built-in deflationary mechanisms where materials used to craft items are destroyed when they construct a new item. Space battles have a heightened sense of urgency where your ship, which is an NFT, can be permanently lost and burned if you battle another player and lose. Star Atlas also becomes more challenging when you leave behind the safety of NPC populated towns and travel into the deep beyond. If you survive, you’ll come home with greater rewards.

Early online games focused on gameplay first and the economy second. The first blockchain games did the opposite and focused on making an economy, but let players down on gameplay. The carefully crafted metaverse of Star Atlas elevates the entire play-to-win genre by uniting these designs into one seamless player experience.

In the words of the metaverse philosopher and deep space poet Jason Silva: Welcome to Star Atlas.

So It Begins: Countdown to Launch of Star Atlas Token Sale on FTX, Raydium and Apollo-X 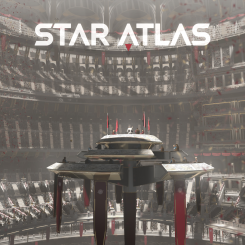