Star Atlas is building a thriving, self-sustainable, player-owned gaming metaverse with fast, intuitive tools enabling the humanity to reimagine its own future.

Star Atlas is the most ambitious blockchain-based gaming project ever envisioned. Underneath its four economic pillars described in the new Metaverse Economics Paper, there are three key foundations: a vast immersive environment set in space of the future, a decentralized economy with financial autonomy derived from blockchain integration, and a metaverse where players shape each other’s experience.

Every asset in the game is an NFT — ships, crews, pets, components, land, structures, clothing, and more. These are bought and sold using ATLAS, a token that functions as the in-game transactional currency for purchasing spacecraft and consumables, or making upgrades and repairs to ships. At the same time, players can utilize the dual-purpose POLIS governance token to shape the strategic element of Star Atlas and exert political influence within the game, as well as be part of the decision-making process during continual game development, like setting the long-term perpetual inflation rate, implementing a version of Harberger’s tax for property values, and determining which regions to build out.

The power of Solana and Serum

To accomplish this, the team at Star Atlas has chosen Solana as the protocol to develop its massively multiplayer metaverse, and tokens can be traded on Serum for real-world income-generating opportunities. While Solana is where players can exercise their creativity in world-building and faction-based diplomacy, trade, and warfare, the unprecedented speed and low transaction costs of Serum make it the perfect DEX to trade ATLAS and in-game items that are minted as NFTs. Serum is the backbone of Star Atlas Galactic Marketplace DEX. It is integrated into every facet of the exchange, from orderbooks to the functionalities of opening and placing orders.

Star Atlas is the largest NFT and gaming project on Solana to date, and arguably in blockchain space at large. That’s why Solana’s high-speed, high-throughput capabilities are crucial to forming the backbone of Star Atlas’ deeply immersive, blockchain-based space exploration MMORPG.

Solana is an advanced, multi-modal blockchain that connects a network of decentralized nodes so efficiently that they function with the speed and efficiency of a single node. While other chains measure their block times in seconds, Solana measures it in milliseconds. Unlike other layer-1, smart contract-enabled blockchains, an abundance of external validators run nodes for Solana, making it a true fit for DeFi.

Think of Solana as Ethereum 2.0, but much faster. It’s a smart contract platform that is designed to be swifter and cheaper than anything else like it. These qualities give developers the power they need to build applications that must constantly refresh and evolve to provide a smooth user experience, like Star Atlas’ galaxy-scale world where many thousands or millions of players are trading, fighting, negotiating, and hanging out all at the same time.

The developers behind Star Atlas are building a world where players can co-exist or destroy each other, but it’s up to the community to sculpt the world of Star Atlas. Since every tradeable element in the game is an NFT, Star Atlas will utilize Metaplex frameworks to let players, artists, and creators develop and launch their own NFT storefronts and auctions. Think of Metaplex’s role as what Shopify did for e-commerce; it incorporates drag-and-drop tools that connect directly with the Solana blockchain, making it easy to use and guaranteeing low minting costs.

Plus, we’ve already developed a prototype for permissioned Serum market wrappers — think of wrapping a cryptocurrency as “porting” a token so it can function on a different blockchain. This is one of our newest features and lays the groundwork for the best possible user experience.

The vision of Star Atlas’ team is to develop a perpetual, sustainable economy where anyone can create content within this deep space frontier and extract real-world financial value. Star Atlas is designed to be more than a game. Players can live on a space station and operate an art gallery, create designs for ships, run a logistics business, establish an information clearing house, and more. Ultimately, it’s up to players to unleash their imagination to shape the world of Star Atlas and create a shared experience in the metaverse. Read the ground-breaking Metaverse Economics Paper detailing the blueprint of a next-gen metaverse economy — available in English Learn more about the approaching ATLAS and POLIS token sale on FTX, Raydium and Apollo-X here.

There have always been significant milestones in the world of gaming and computer generated reality. Pivotal moments have forever changed the way people play games and interact — the introduction of arcade machines, the PLATO network system, the LAN party, and now, NFTs, which use blockchain technology to uniquely identify digital objects and enable verification of their authenticity and rarity. The gaming industry is beginning to use NFTs as in-game assets, reimagining what it means to earn or own an in-game item. 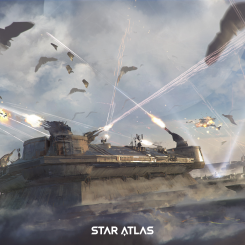